Pumpkin Pie in a Cupcake 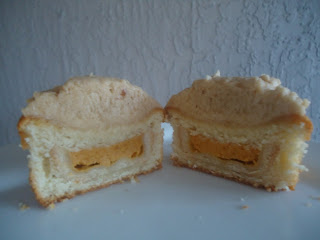 I didn't get the chance to really pretty this cupcake up as I was more interested in the middle of the cupcake. People are amazed when I cut the thing in half. YES! That is a REAL mini pumpkin pie! I can't remember where I got this recipe. I had made these back in October but they were gone before I could get a proper picture.

This is a simple vanilla bean cake with a brown sugar cinnamon buttercream and of course, the pumpkin pie complete with crust baked inside.

They really are delicious!! However, time consuming as you have to make the crust, the pumpkin pie filling, then the cupcakes, then the buttercream.

I've had requests for other varieties - cherry cheesecake, apple pie & cherry pie. So must get working on these soon!

FoodBeast
Posted by Michele at 10:24 AM