I thought it would be neat to make a "Leap Year" cupcake - something over the top that I hadn't tried before.  I didn't want to put frogs on it though or anything else that signifies "leaping".  I just think something different should suffice :)  I had these really neat wrappers I made for them but my printer went on strike.  Phooey.

There are a few things about this cupcake I learned while making it that I probably won't be able to do again to them and a few things, like always, that I'd tweak. 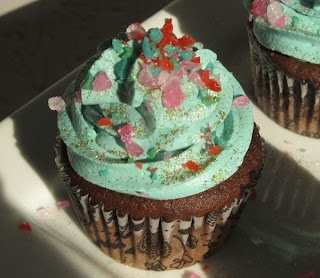 Rockstars are a deep chocolate cake, filled with a marshmallow cream and topped with shortbread cookie crumbles, piped over that is a vanilla buttercream, sprinkled with gold and rainbow discos dust, crushed rock sugar and pop rocks.  This cupcake has a lot of texture.  If you don't like cupcakes with texture (crunch with the cake) then it's not for you!  But it was yummy! 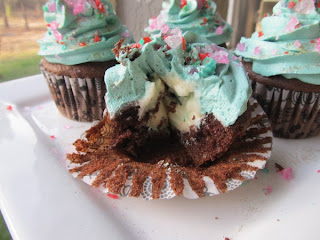 I originally wanted a white chocolate ganache in the center but though, hey, I've done that before.  So marshmallow it was - since I don't get to use marshmallow cream that often and I really like it. 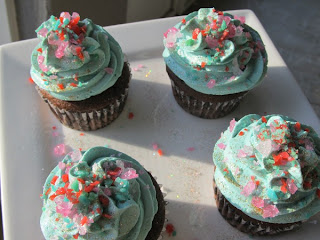 What I learned - pop rocks melt the longer they are exposed to the air.  I did not know this.  The one cupcake that I ate was just made and the pop rocks were the neatest thing!  You could feel them fizzling as you ate the cupcake!  This might be something where I have to supply the pop rocks in the packs and let people put them on themselves.

What I want to tweak - I wanted it to be a little more BLUE.  Closer to a neon like blue.  I also wanted to add edible blue disco dust but it was on back order.  Phooey.

Otherwise I like the way they look.  They're colorful :)

Preheat oven to 350.
Mix all together.  Place in cupcake liners (makes 24)
Bake for 15 minutes or until toothpick inserted comes out clean.

Mix all together and set aside.

Cut a hole in the middle of each cupcake and fill with marshmallow cream.  Top with a few pieces of the crumbled shortbread.

Mix all together.  Pipe over and around crumbled cookies.