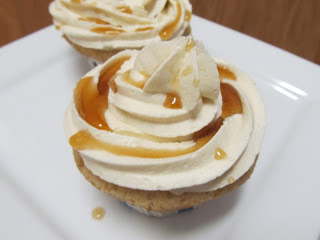 Looks can be deceiving....someone told me this looked kinda plain.  Well let me tell you, with all I've been doing this is the best this cupcake is going to get!  LOL!  However, the taste is amazing!!!
The cupcake is a moist cinnamon maple cake with a maple buttercream and maple drizzle.  The cupcake is stuffed with a piece of penuche fudge.  Penuche fudge is a mapley, caramelly fudge that's very sweet.  It's very good! 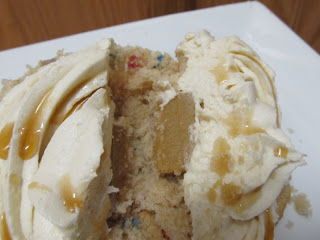 If you love maple this cupcake is for you!!!  The fudge is wonderful on its own too.  I have a recipe for a white chocolate fudge.....but that's for another cupcake!
Posted by Michele at 2:22 PM No comments:

Sorry for the hiatus!  My summer courses started May 16th and the one 5 week course is a doozey!!  Between having 2 weeks to read 10 chapters for an exam on May 31st, the FTCE (Florida Teacher's Certification Exam) to study for and another exam on June 6th to study for in the 2nd class, I've been a bit preoccupied.  BUT HAVE NO FEAR! I have new cupcakes that I'm planning on finishing this week so there will be something up by the the 3rd of June :)
Posted by Michele at 12:41 PM No comments: 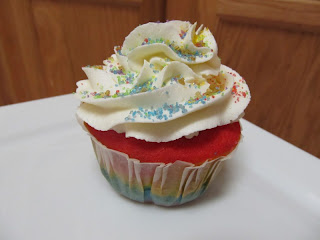 Ok so just about everyone and their mother has made rainbow cupcakes.  So I figured it was about time I did it as well.  This was a request from someone for their Rainbow Girls group.  What a great idea!  Rainbow Cupcakes for Rainbow Girls!  The twist, however, is in the middle. 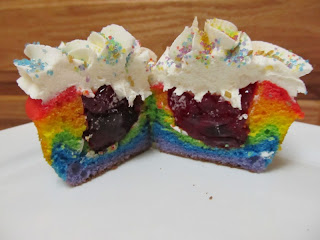 That's Jell-O!  Cherry to be precise!  You can of course use any flavor you want since the base cake is vanilla.  The woman who gave me the idea originally mentioned doing cupcakes with Jell-O in another manner - but won't give away my secret here just yet.  Maybe I'll make one the way she originally thought of it later and post it.  This was just simpler for her girls I think though.  The colors came out really nice, I was happy with it.  The icing is a simple confectioner's sugar icing because I stand by my theory that kids prefer the confectioner's over the buttercream. 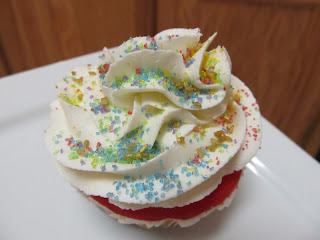 I decorated the cupcakes with sugared sprinkles in rainbow colors and if you look closely you'll see some gold sugar sprinkles.....afterall....can't have a rainbow without gold!
These MUST stay refrigerated or the Jell-O will "melt".  I hope the girls enjoy them, Christina!
Posted by Michele at 5:46 PM 2 comments: 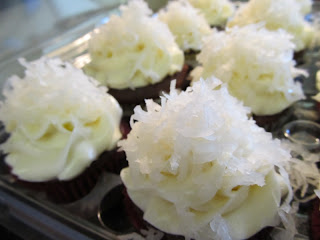 This is definitely a seasonal item.  I could never find enough Russell Stover coconut cream eggs for this cupcake.  Luckily my mother, who LOVES RS coconut cream eggs, was able to find about 10 of them.  So this became the Mother's Day cupcake this year. 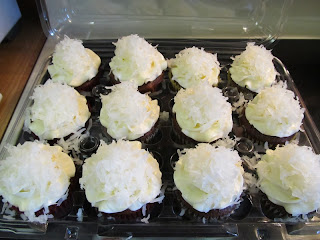 These came out absolutely amazing!  These cupcakes are a chocolate cake, stuffed with one half of a Russell Stover coconut cream egg (one half because a whole one was too big), topped with a coconut cream buttercream and coconut flakes. 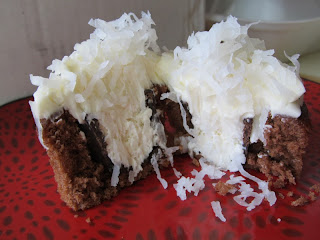 Inside of the cupcake
I think I'll add this one as my first seasonal item.  While some of the Christmas time cupcakes also could be considered seasonal, they are also somewhat easy to replicate.  But you can't replicate these coconut cream eggs!  So seasonal this one is.  And they are so yummy!  A glass of milk or cup of coffee is definitely warranted!!
Posted by Michele at 3:11 PM No comments: 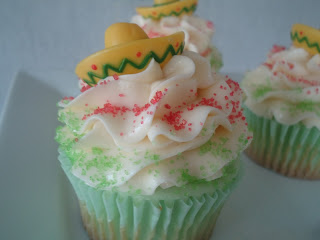 I wasn't sure what to do for Cinco De Mayo cupcakes.  I had heard spiced chocolate, tequila, margarita etc.....but for me Cinco De Mayo isn't Cinco De Mayo without Corona and lime.
I had seen recipes for a beer buttercream but really wasn't sure I liked the idea.  Afterall, beer is bitter and buttercream is sweet.   I didn't want to put it in the cake either because I had planned to sprinkle the top with the green and red sprinkles and didn't want to make the buttercream lime.  Together with the white buttercream they signify the colors of Mexico.
I committed one act of sacrelige.  I used a box mix.  Now I don't usually do this but I've been swamped between orders and exams but I had to do a Cinco de Mayo cupcake.  Below is the recipe if you'd like to make it. 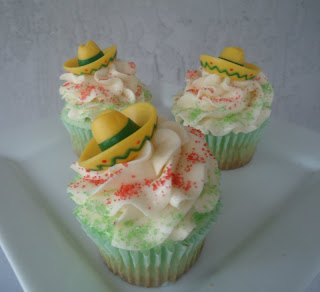 The sombreros are not edible.  I got them here A Bakers Place.
The cupcake is a vanilla cupcake infused with lime zest and lime juice topped with a Corona buttercream.
Cinco De Mayo Lime Corona Cupcakes
1 box white cake mix
3 eggs
1 cup buttermilk
1/2 cup canola oil
2 teaspoons lime zest
1/2 cup lime juice (fresh) < - I enhanced it a bit with key lime juice from a bottle
Buttercream
5 egg whites
1 cup plus 2 tablespoons sugar
4 sticks unsalted butter, room temp
1 1/4 tspn pure vanilla extract
1/4 cup Corona
confectioner's sugar or flour to keep the buttercream from getting too liquidy
Mix the ingredients for the cupcakes and place in 12 liners.  Bake for 15 - 20 minutes at 350 degrees until toothpick inserted comes out clean.
Place Corona in saucepan and simmer for about 10 minutes.  This enhances the flavor of the beer.   **Cool completely before adding to buttercream.
In a heat proof mixing bowl, add the egg whites and sugar.  Heat over simmering water and whisk until sugar is completely dissolved.  Place bowl on mixer with whisk attachment and whisk on medium-high until stiff peaks form.  Reduce speed to medium and add butter 1 tablespoon at a time until well incorporated.  Add vanilla.
With paddle attachment place mixer on high and beat until buttercream becomes light and fluffy - about 5 minutes or so.  Reduce speed to medium and add the Corona.  If the buttercream appears to get too liquidy or lose it's fluffy-ness - add a little but of flour or confectioner's sugar until it begins to take on its former fluffy self.
Pipe onto cooled cupcakes and decorate.
I wasn't sure how this was going to turn out or if I was even going to be able to taste the beer, but I was wrong.  You can most certainly taste it in the buttercream and the lime adds to it.  It was like eating a Corona with lime :)
Posted by Michele at 1:13 PM 9 comments: