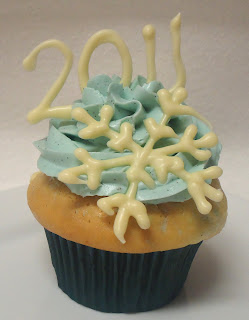 Ok so I couldn't wait until January 1, 2011 to make this cupcake. Mostly because I would like to relax for at least one holiday this year! :)

I wanted to do a cupcake with a light blue icing and a snowflake.
My sister said no. I say NYAH NYAH!!

This is a white cake infused with almond and anise. "what the heck is anise" you ask? Do you know what black licorice is? That's the flavor of anise. However I tend to think black licorice is a bit more bitter than anise itself. If you are a coffee drinker, try Sambuca. Yummo.

I digress. I was truly afraid of the anise. I didn't want it to be too licorice. But it actually came out really good! The buttercream is a vanilla bean buttercream (hence the black specks) and I just added blue food coloring. The 2011 and snowflake (made by freehand, thank you very much) are made of white chocolate (forgive my squiggly 1 in the year...it's my first time). Here is a picture of the cupcake with just the snowflake: 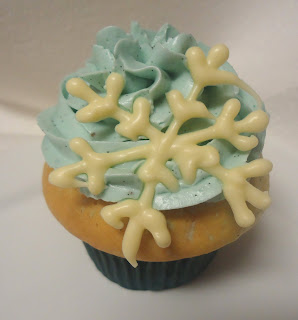 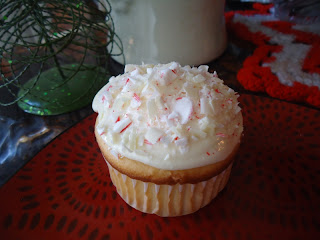 So in making cupcakes for Christmas (for family) I had 2 chocolate based cupcakes that were requested. I thought vanilla might feel a little betrayed so I turned the Peppermint Chocolate cupcake into a vanilla cake.

It was an "on the wimb" kinda cupcake but it came out really good! The peppermint was not overbearing and the cream cheese just lent to it.

Hope everyone had a wonderful holiday!

Posted by Michele at 5:48 PM No comments: 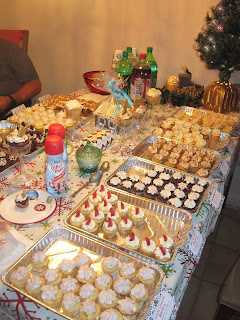 OMG! Did I really make 265 mini cupcakes!? I DID! The work involved was immense but it was so much fun! Two dozen cupcakes of eleven flavors including four new ones! Take a look at all the photos posted below.

With the help of my sister (watch out! one day Cupcakeables! may become Two Sisters Cupcakery) we cranked out two dozen minis of the following: S'mores, Key Lime, Coconut, Mocha Frappuccino, Vanilla Almond, Chocolate Peppermint and Dannen O'Donnels (Pretzel Caramel). The four new flavors were Gingerbread with a Maple Buttercream, Oreo Surprise with a Cookies and Cream Buttercream and a White Chocolate Raspberry with a White Chocolate Cream Cheese Frosting in two varieties (one filled with white chocolate, the other with raspberry jam). Oh! And I made an Almond Cinnamon Vegan Cupcake with Cinnamon Glaze. Believe it or not, non believers, it was really good!

I rather like the minis. Most people, I'm finding, prefer them. They are bite size, you can have more than one flavor without filling up on a standard sized cupcake and you can get more for your buck. I may stick primarily with minis but also offer standards. The minis look pretty too with all the little decorations you can put on them.

Here are some photos from the party in Fort Lauderdale. I'll be having one in Ocala after the New Year! :) 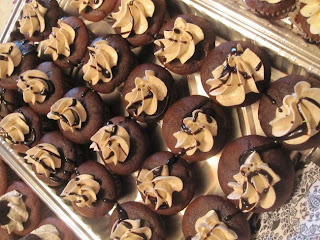 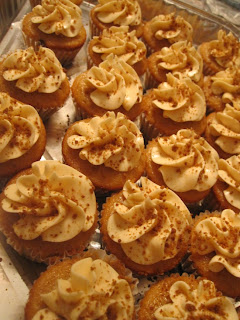 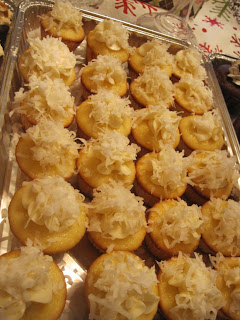 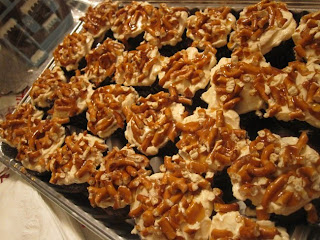 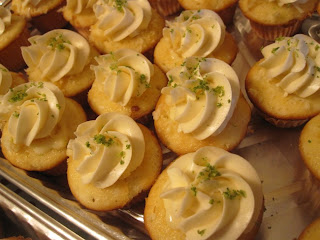 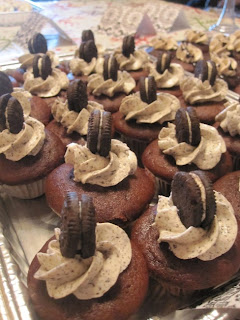 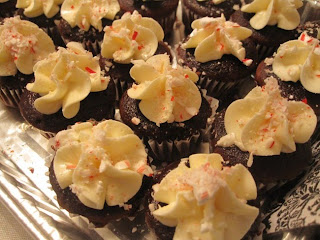 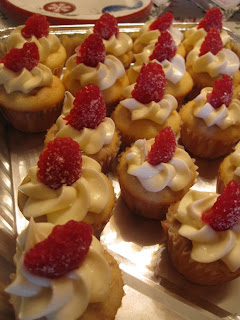 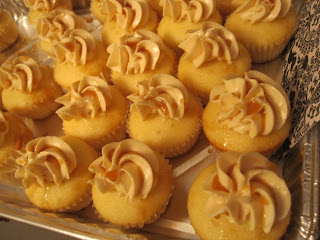 Posted by Michele at 2:09 PM No comments: 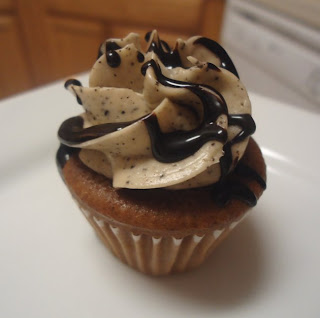 My cousin requested this flavor mix. I was quite pleased with the flavor! The espresso isn't too strong but just enough that it tastes like mocha.

This is a mini cupcake, one of my sampler sets from the previous post. This of course can be made into a standard cupcake, as I'll be doing for Kim in a few weeks.

The Mocha Frapp has a chocolate cake infused with espresso, a vanilla buttercreme with espresso infused to give it a mocha flavor and then drizzled with dark chocolate sauce. I actually have or rather had (think I ate it) espresso sauce. Something for ice cream I think. But it has gone away and I think made it's way into one too many bowls of vanilla ice cream.....

Side note: I love the 1M tip on the minis! After the debacle with my previous 1M tip, where it met its maker in the garbage disposal (not sure how that happened), I bought 5 more 1 M tips! YAY!
Posted by Michele at 12:51 PM No comments: This was my first request for samplers (for a small fee). I do them in minis because I feel that one bite is usually enough to tell if you like something and also if you don't like it, the rest of the cupcake isn't wasted :)

I did these for a friend in the area who requested them for work.

Clockwise from far left: Peppermint Chocolate, Mocha Frappuccino (first time I made these and they came out REALLY good), S'mores, Vanilla & Almond with Salted Caramel Buttercream and Coconut.

I'm glad they were a hit!
Posted by Michele at 8:26 PM No comments: