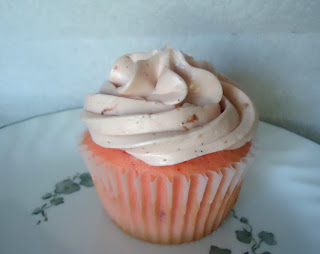 Doesn't that look yummy? For anyone who likes strawberries this is the cupcake bomb! Although with the recipe I don't taste a whole lot of lemon in it which is probably nice. It is slightly tart, however. I can't remember where I got this recipe from, but the buttercreme was a nightmare. No matter how much confectioner's sugar I put into the mix it would still be loose and runny. So I switched gears and pulled out a tub of vanilla buttercreme I had made last week (it turned out awesome) and added strawberry jam and some lemon juice. VIOLA! That worked. I believe from this point on I will not stray from my own buttercreme recipe and will just add to the vanilla base what I want. I thought it might be fun to try other people's recipes for buttercreme but it turned out to be a not so good idea. Not saying other people don't have good buttercreme / icing recipes, just the one I selected wasn't as good as some others. Plus the jam (I recommend jelly next time) has small pieces of strawberry in it that adds to the buttercreme. This one might be good with a straight lemon buttercreme but I was afraid it would be too sour.
Posted by Michele at 10:22 AM