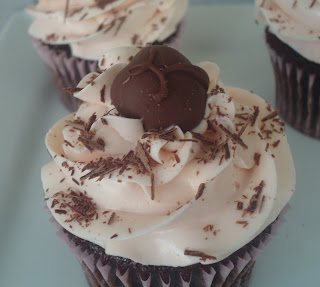 Ok so this was on a wimb.  A friend on Facebook posted a status about needing to drink Dr Pepper to keep herself awake and I thought....hmmmm....cupcake.  But of course I couldn't do JUST Dr Pepper so I bought the cherry Dr Pepper. I am not a huge fan of Dr Pepper but I like the cherry one. 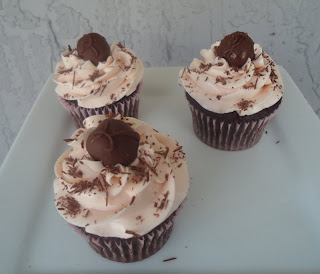 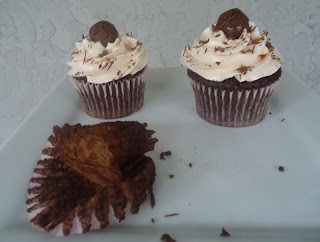 The casualties of being OH SO YUMMY!
Below is the recipe for anyone who would like to make it.  I added the box short cut too.  The buttercream is a true swiss meringue (I make all my cupcakes with swiss meringue buttercream.  I very rarely deviate.) so if you want a simple confectioner's buttercream - I added that at the bottom too.   Enjoy!

BTW - the from scratch and meringue buttercream are very time consuming.  So if you want to make them quickly, use the box version and confectioner's sugar buttercream below.
Cherry Dr Pepper Cupcakes
Box version ingredients
1 box dark chocolate / fudge cake mix
1 box chocolate pudding (4oz)
3 eggs
1 cup buttermilk
1/2 cup canola oil
1/2 cup cherry Dr Pepper
Mix all until well incorporated.  Preheat oven to 350 degrees.  Fill cupcake liners 2/3 of the way and cook for 12 - 15 minutes or until toothpick comes out clean.  Makes 18 cupcakes.
From scratch ingredients
1 cup unsweetend dark chocolate Dutch processed cocoa power
3/4 cup hot water
3 cups all purpose flour
1 tspn baking soda
1 tspn baking powder
1 1/4 tspn coarse salt
3 sticks unsalted butter
2 1/2 cups sugar
1/2 cup cherry Dr Pepper
4 large eggs
1 tblspn plus 1 tspn vanilla extract
1 cup sour cream
Preheat oven to 350 degrees.  This recipe makes about 28 cupcakes.  Place cupcake liners in their tins.
Whisk cocoa and hot water together until smooth.  In a separate bowl whisk the flour, baking soda, baking powder and salt.  Set aside.
Melt butter with sugar in a saucepan over medium heat.  Stir to combine.  Remove from heat and pour into your mixing bowl.  On medium-low speed, beat the mixture until it is cool - about 5 minutes.  Add the eggs one at a time and until well incorporated.  Scrape down sides of bowl as needed.  Add vanilla, Dr Pepper and then the cocoa mix.  Beat until well combined.  Reduce the speed to low and add the flour mixture in two batches alternating with the sour cream.  Beat until combined.
Divide batter and fill cupcake liners 2/3 full.  Bake 15 - 18 minutes or until toothpick comes out clean.  Let cool completely before adding buttercream.
Dr Pepper Buttercream (Swiss Meringue)
Ingredients
5 large egg whites
1 cup plus 2 tblspn sugar
4 sticks unsalted butter at room temperature but still firm
1 tspn pure vanilla extract
1/2 cup cherry Dr Pepper
** Confectioner's Sugar Buttercream Ingredients
3 sticks unsalted butter
4 cups confectioner's sugar
1/2 tspn pure vanilla extract
between 1/4 & 1/2 cup Dr Pepper (more if you want but don't make the mixture too liquidy - add more confectioner's sugar if you over do it)   **
fresh or marischino cherries for garnish (as many as there are cupcakes)
8 oz dark chocolate for dipping
1 chocolate bar for curling chocolate pieces
Take cherries and place them in a container filled with Dr Pepper.  Leave them overnight to soak.
When ready, take the cherries out of the Dr Pepper soak and pat dry.  Take a small tray and line with wax paper.  Melt the chocolate in the microwave a little at a time (about 20 sec each) and stir until chocolate is dippable.  Using a fork, dip the cherries in chocolate and place on waxed lined tray.  Put in refrigerator until ready.
Place the bar of dark chocolate into the refrigerator as it will be easier to curl later.
Combine egg whites and sugar in mixing bowl.  Place over boiling water and whisk until the sugar dissolves.  The egg white and sugar mixture will be smooth and silky when rubbed between the fingers.  Add vanilla and Dr Pepper.
Place on mixer with whisk attachment at medium speed.  Mix until bottom of bowl is cool to the touch.  Add vanilla and Dr Pepper.  Add the butter in cubes until it is well incorporated.
Remove the whisk attachment and add the paddle attachment.  Mix on high for about 5 minutes or until mixture turns to buttercream (it will be liquidy for a moment but eventually will begin to look more like buttercream). Pipe or spread the buttercream onto the cupcakes.
** Confectioner's Sugar - cream butter until pale and fluffy.  Reduce speed to low and add confectioner's sugar 1/2 cup at a time alternating with Dr Pepper.  After each addition of confectioner's sugar - raise the mixer to high speed for 10 seconds, then reduce to low and continue.  Add vanilla and beat until smooth. Pipe or spread on cupcakes.**
Take the cherries and the bar of chocolate out of the refrigerator.  Using a vegetable peeler, scrape or curl the chocolate and then sprinkle on top of the cupcake.  Garnish with one chocolate covered cherry.
Enjoy!
Posted by Michele at 12:25 PM