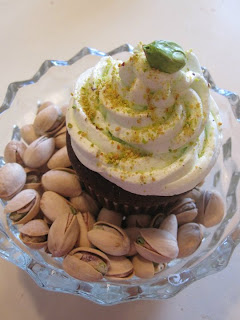 
So most people don't like pistachio as I'm finding out. But I promise you you'll like these. While on a cruise for my tenth anniversary, we went on a tour of the ship. While in the kitchen, the corporate pastry chef for Princess had made several desserts just for us to try. One of them was a dark chocolate with pistachio cream inside. It was heavenly! And so his creation is the inspiration for this cupcake. Not to mention my father loves pistachio. The cake is chocolate and I really don't think this would do well with a vanilla cake. The pistachio itself is sweet and the chocolate cake isn't overly sweet. So I think they work well together. The pistachio cream buttercream is dusted with ground pistachios. 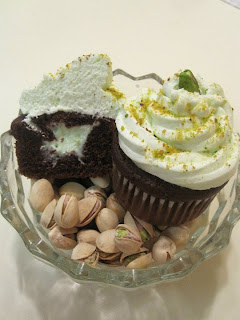 As you can see in this photo I filled the cupcake with a pistachio cream that I made. My father said it didn't have enough pistachio flavor, I think it was just fine. I don't like one flavor to overpower the other, the object is for you to be able to taste the chocolate too. I could do with or without the filling. I really like how this one came out. It was my first real "let's see what we can make out of these flavors" cupcake.
Posted by Michele at 5:15 PM