HAPPY NEW YEAR!
Yeah it's that time again.  Last year I did an anisette cupcake for 2011.  This year mimosas were on my mind.  Think it had something to do with Christmas morning breakfast and the glass of orange juice spiked with champagne.......anyhow.
I love oranges.  I love orange flavor in a cake, scones, biscuit you name it.  So I embarked in making my own orange curd.  The recipe I borrowed from Ina Garten really wasn't what I wanted but I messed with it a bit.  I wanted a more custard like curd (the lemon curd I have in my fridge, for example, has no bits of zest.  But this orange recipe has ton).  So if you don't want the bits of zest I suggest making a pudding or mousse or even infusing the buttercream with orange extract or some orange juice.  Next time I will pulverize the curd in a blender or food processor a little more and get rid of the pieces of zest. 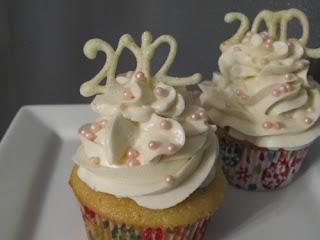 The cake is a moist vanilla cake that I added the zest of one large orange to along with 1 tspn pure orange extract.  * Please people.  If you are going to use a fruit flavored extract make sure it isn't imitation.  I hate the imitation fruit extracts they taste fake.  Lemon is the worst.  Either use real fruit juices or pure extract.  Thank you.
When the cupcakes were done, I filled them with the curd (which I laced with about 1/4 cup pink champagne).  I like pink champagne but you can use whatever champagne you want.
The buttercream is a simple vanilla swiss buttercream with about oh....maybe 1/2 cup pink champagne.  It was palpable in the air which means it was the perfect amount!
I decorated the cupcake with pink edible pearls and a 2012 I made out of melted white chocolate and sprinkled with gold disco dust.
Here is the inside. 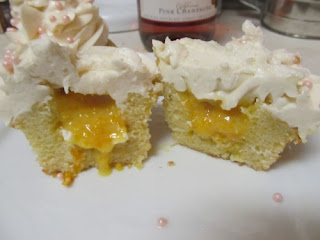 Despite my feelings about the curd, it really was very yummy!!  And tasted like a mimosa in cupcake form!
Ingredients
1 box vanilla cake mix
3 eggs
1/2 cup oil
1 cup buttermilk (1 tblspn vinegar to 1 cup milk - let sit for 5 minutes)
Zest from one orange
1 tspn pure orange extract
Mix all together.
Orange Curd

*someone mentioned I could short cut and add 1 1/2 cups of Orange Marmalade rather than zest the orange and put it in a food processor with sugar.....let me know if you try it.

Remove the zest from the oranges with a vegetable peeler - avoid the white pith as much as possible.  Put the zest and sugar in a food processor and pulse until zest is finely minced.

Cream the butter in a mixer.  Add sugar/orange mix. Blend until light and fluffy.  Add eggs one at a time then the orange juice and salt.  Mix until well combined.

Pour mixture into a saucepan and cook over low heat until thickened - takes about 15 - 20 minutes.  Do not over cook or it will curdle.  If using a candy thermometer, 175F is a good end temperature for the mix.  Remove from pan and let cool or refrigerate.