Cherry Pie in a Cupcake....cupcakes

Okay so my bestie came to visit shortly after the Christmas holiday.  Since her hubby was making me his most delicious jambalaya, in response I made them my Caramel Pretzel Cupcakes and the Cherry Pie ones.  I had been wanting to make the cherry pie ones for awhile but never got around to it.  The following is a little step by step on what I did and at the end the ingredients and recipe and such for making them.  They turned out really yummy!  I love cherries.  So this was right up my ally! 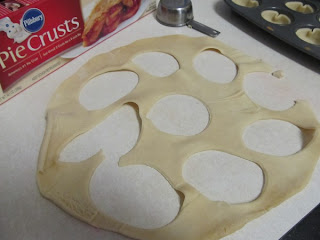 First you need some pie crust.  I bought the refrigerated brand because I didn't have time to make my own pie crust.  These work just as well if not better and there are two 9" rounds in the package.  You also will need a mini cupcake tin.  Cut circles out to fit the cavities in the tin.  I used a 1/3 cup measuring cup (in the background there - the silver thing) and using the hollow side, cut the rounds out. Then place them in the tins - press them down and along the sides a bit.  I didn't use any butter or flour inside the tins as they always seem to come out without any issues.  I did this with the Pumpkin Pie in a Cupcake too.  You can "pull" the dough so it comes up higher on the tin if you want but I don't find it a necessary thing. Technically you are suppose to bake the crust first before filling it - I didn't do that.  I forgot.  It doesn't matter much but if you want to bake it first, pop them into a preheated oven at 400F and bake for about 5 - 10 minutes.  Keep an eye on it as the directions on the box is for a full 9" piece of dough and this isn't that.  ONWARD.... 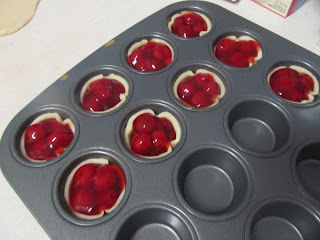 Anyhow, get yerself a can of cherry pie filling and fill the pie crusts - if you already baked the crusts - pop them back in the oven for about 5 minutes.  If not, NOW put them in a preheated oven at 400F and bake for about 5 - 10 minutes.  Again, keep an eye on them.  Each crust took about 4 cherries from the can plus some sauce. 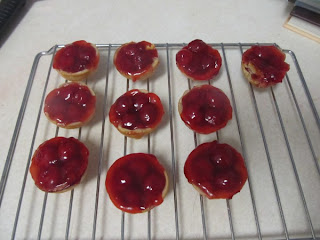 Viola!  Mini cherry pies.  The one all the way to the top right I ate....oh yes I did.  And it were yummy!  * I used a small icing spatula to pop them out of the tin.  DO NOT turn the tin over and let them fall out.  This does not work in your favor.  Use a spoon or something to get them out.  They should come out really easy.  However, like in my case, I had two or three where the filling bubbled over and stuck to the tin - you'll need to carefully cut it away from the tin with a knife. 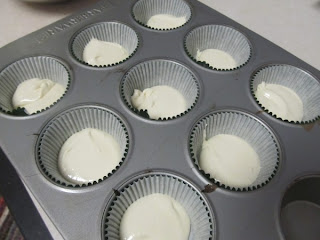 Next, line the tins of a standard cupcake tin with liners.  Mix your batter (I used simple vanilla because vanilla and cherry I think go hand in hand) and place about 1 - 2 teaspoons in the bottom of each liner just to coat it. 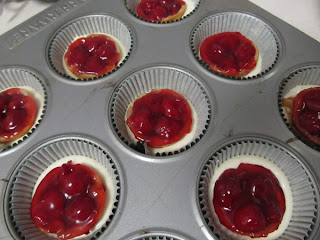 Carefully place a mini cherry pie in each batter filled liner and press down just a bit. 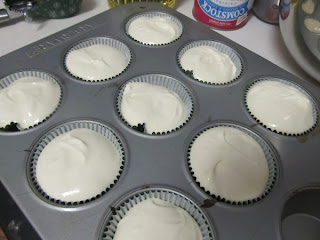 I use an ice cream scoop but you can use what you want.  But fill the cupcake liners making sure the pies are covered.  Remember that this batter is going to rise a bit so don't over fill the liners, like I did in two (it just creates a flat top on the cupcake that you may or may not have to cut away when done).
Place in an oven at 350F and bake for 22 minutes.  Mine actually required 28 minutes but I've been told ovens may vary.  So just keep an eye on them.  An inserted toothpick at the end that comes out clean means they are done. 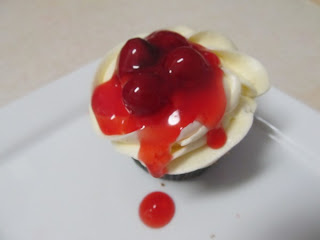 Here is one of the finished cupcakes topped with vanilla buttercream and cherry pie filling. 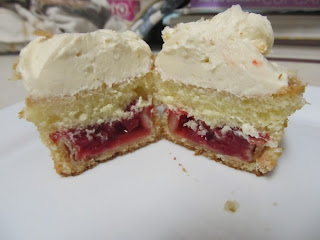 And here is the inside!
You can substitute the cherry for apple, blueberry, peach...whatever.  The instructions would be the same for each.  Enjoy!!
Ingredients
1 box vanilla cake batter
3 eggs
1/2 cup oil
1 cup buttermilk (or 1 tblspn vinegar added to 1 cup whole milk - let sit for 5 minutes)
Mix all ingredients together.
1 box refrigerated pie crusts
1 can pie filling (cherry, apple, blueberry whichever)
Following steps above for making the mini pies
Buttercream
1 cup plus 2 tblspn sugar
5 egg whites
1 1/4 tspn vanilla extract
4 sticks unsalted butter
Place sugar and egg whites in bowl from mixer and over boiling water, whisk until sugar is dissolved (don't let the bottom of the bowl touch the water or it will cook).
With whisk attachment, whisk sugared egg whites until bottom of bowl is cool to touch.  Add butter by tablespoon to the mixer.  Once butter is fully incorporated, add vanilla.
Remove whisk attachment and add paddle.  Mix on medium-high until buttercream thickens.
Then pipe or spread onto cooled cupcakes.
Posted by Michele at 7:28 PM