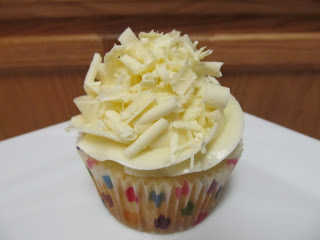 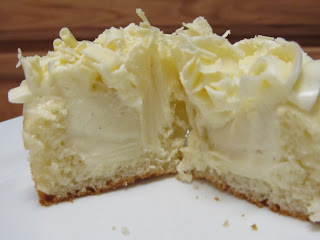 I am not a huge fan of vanilla but this was really really good.  And no I did not deep fry this one :)
The buttercream is my standard with the exception of 1/2 vanilla bean and 1/4 tspn vanilla extract.  The short cut version is one white cake mix with the addition of 1scraped vanilla bean and the scraped white chocolate for the top.  I've have had people ask for the short cut version so they could replicate.  If you ever want my version, the longer version, just let me know :)
Vanilla White Chocolate Ganache
1 tablespoon corn syrup
2/3 cup heavy cream
1/2 vanilla bean (scrape the seeds)
6oz white chocolate (chips or squares, just chop the squares up)
Place corn syrup, heavy cream and split vanilla bean pod and seeds in sauce pan and bring to a boil over medium heat.  Place white chocolate in heat proof bowl.   Remove the vanilla bean pod and pour the hot mixture over the white chocolate.  Mix until smooth.  Place in refrigerator for 45 minutes.  Pour ganache mixture into mixing bowl and whisk at high speed until thick (about 3 minutes).  Fill cupcakes and enjoy!
Posted by Michele at 6:13 PM