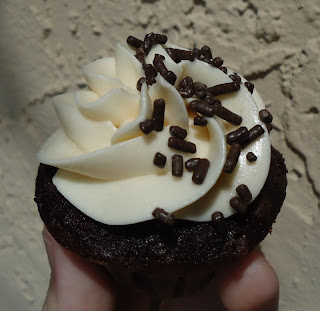 This is actually the first liquored up cupcake I've made.  And it was soooooo good.  Or at least it had A LOT of thumbs up from the recent cupcake party I hosted.
This is a dark chocolate cake soaked in Irish whiskey filled with a hazelnut chocolate ganache topped with a Bailey's buttercream and sprinkled with chocolate sprinkles.  I later added a little St Patrick's Day gold edible glitter.  Just in time for St Patrick's Day!! 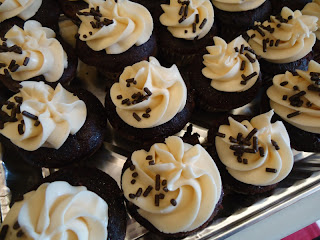 I made minis for the party, as is standard, and they were the first to go.  I think I might have one or two left to eat later!!!  YUM!!  I made other alcohol laced cupcakes for the party but there were my favorite.  There was enough liquor to say WOW but not enough it knocked you over!!  I also offer these as standards!
Posted by Michele at 1:15 PM